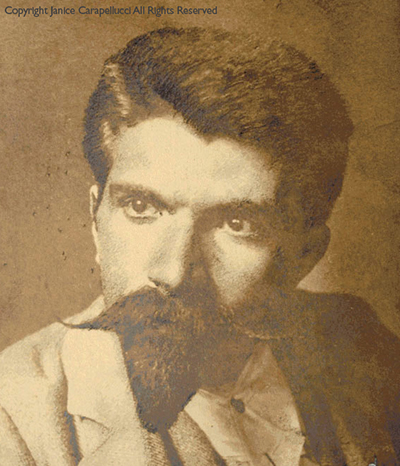 Photograph: Donatus Buongiorno; circa 1917; Private collection. Copyright Janice Carapellucci, all rights reserved. May not be reproduced or used in any manner or in any media without prior written permission.

Donatus Buongiorno was a late-19th- and early-20th-century Italian and American artist of Naples and New York.

His most visible, most enduring legacy in New York is a commission of 32 murals depicting the lives of Christ, St. Francis of Assisi, and St. Anthony of Padua, completed between 1916 and 1917 for the Shrine Church of the Most Precious Blood at 113 Baxter Street in Manhattan’s Little Italy.

In 1892, he emigrated to New York, which became his base for the next 27 years and where he became a naturalized American citizen in 1895. In 1919 he returned to Italy to live full-time, though he continued to travel to the U.S. for work until 1922. Regardless of which country was home at any given time, he traveled to the other country every couple of years for months-long work stints.

In New York, in the 1890s, he worked as a designer in a wallpaper factory. In the U.S. in the early 1900s through the 1920s, he painted commissioned murals in Italian-American Catholic churches in New York, Boston, Indianapolis and Brattleboro, Vermont.

In Italy, in 1909, he worked on the restoration of La Collegiata di San Michele Arcangelo, an important 17th-century church in his hometown of Solofra, Avellino, and he had an exhibition of paintings there.

In 1911, in Italy, he attended an international art congress of art educators in Rome, while back in the U.S., he had work accepted in the prestigious, competitive annual exhibition of the Pennsylvania Academy of Fine Arts in Philadelphia, Pennsylvania.

Throughout his life, he made easel paintings which he sold out of his studios in New York and Naples. He also imported paintings from Italy to the U.S. which he sold in New York, San Francisco and elsewhere, acting as a dealer for other artists.

He was politically active in the United States. He painted a commissioned mural of President William McKinley which may have been exhibited at the Pan-American Exposition of 1901 in Buffalo, New York, and, in 1908, he joined with other artists in signing a petition to the U.S. Congress opposing tariffs on imported artwork.

Buongiorno died in 1935 near Naples.

Donatus Buongiorno was my great-grandmother’s brother and the first member of my family to emigrate from Italy to the U.S. He sponsored a stream of family members who followed, including my maternal grandfather, who came as a 13-year-old in 1907.

Buongiorno is not famous outside my family, but I am aiming to change that. If you know anything about Donatus Buongiorno or his art career, if you own one of his paintings, or if you are a family member—especially Italian descendants of family members who did not emigrate—I would love to hear from you. Leave a reply below, or contact me by private e-mail here.