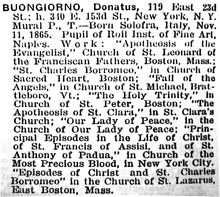 American Art Annual was a yearly publication that covered art museums, arts centers and art educational institutions, as well as artist listings, obituaries, book and magazine publications, auctions and other news related to the artistic community.

Founded in 1898 by New York artist, art educator and arts administrator Florence Nightingale Levy, in 1913 it became the official publication of the American Federation of the Arts, an organization with which Ms. Levy was associated for many years. Later, she sold the publication to another publisher and it continues to exist today as two separate publications: Who’s Who in American Art and American Art Directory.

Donatus Buongiorno was listed in the directory from 1907 to 1925. The entry shown above, his most comprehensive, first appeared in 1919 and did not change through 1925, the date of his last listing. His earlier entries, from 1907–1919, did not list as many churches, therefore, I assume this is a complete listing of his church commissions in the United States.