Does anyone want to help me with this fun family project? My next task is to find the help-wanted ad Domenic Troisi answered to get his job in Williamsport. Who wants in?!

Does anyone have easy, perhaps free, access to ProQuest or other paid-service online databases of scanned newspapers? (There’s another one called “Historic Newspapers,” or something obvious like that.)

I’ve checked all the freebies I can find online, and I have to go (all the way) into Manhattan to use ProQuest (and other databases) for free at the New York Public Library. (No complaints, at least they have the subscriptions at this library I adore, but there is that subway ride, and then I’m not on my own computer to save files and make screen grabs easily.)

Hint to academics and registered college students: you can often log on to your libraries’ accounts from home. Check it out and let me know….

What clues do we have?
As always, I start with Domenic’s memoir. He wrote:

Again I was out looking for a job when I read an ad in the “Help Wanted” pages of the New York World. This job was for a man to run a uniform factory in Williamsport, Pa. My experience with the shop in Jamestown qualified me for this new job. The ad specified the interview was to take place that day at 3 p.m. I pressed my suit, polished my shoes, had a shave and haircut and was ready to go. The address was a walk-up office building on Fifth Avenue not far from the New York Library (my second home). At 10:30 a.m. I thought, “Should I wait until 3 p.m. or should I go and see?” I became impatient (you guessed it, I went to see), had my interview with Mr. A. N. Bloom. He seemed to like me but he would not hire me. He said it wasn’t fair to the other applicants. I said I would be back at 3 p.m.

I left the office, bought a sandwich and a cup of coffee at a lunch wagon and retired to my second home—the Technical Room of the New York Public Library, studied a number of books on cutting and designing uniforms for Mail Carriers, and took notes on specifications and ratings for these government carriers. By three o’clock I went back to the office building I had been in the morning, but this time the staircase was full of applicants for the job. Some of the men in line appeared to be better qualified than I, big men older and wiser. I must have been about the 20th in line and the smallest in stature. When my turn came, Mr. Bloom said, “Young man you were here this morning!”

I said “Yes, Sir! However, I have something more to add. I will come to Williamsport only if you pay my fare, and after four weeks, if you find my work does not please you, I will pay my own fare back to New York City. But if I fill the bill to your satisfaction, you will give me a ten dollar weekly raise and keep me. I will do my very best for you.”

He said I would hear from him. Three days later I received a letter with a railroad ticket to Williamsport.

(An aside: Does Domenic’s proposition sound like “Heads you lose, tails I win” to anyone else but me?) 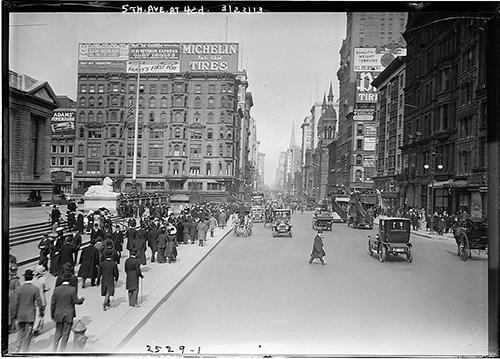 Photograph of Fifth Avenue between 40th and 41st streets looking north to 42nd on March 23, 1913, the time period Domenic interviewed for his Williamsport job perhaps in one of the office buildings on the right, then ate lunch at a street cart and visited the The New York Public Library which is on the left. He reports that he was dressed well for his interview, perhaps as well as these people who were promenading on Easter Sunday! Photograph courtesy of the Library of Congress Bain Collection, used with permission.

The hunt:
At the turn of the century, there were hundreds of daily newspapers in New York (not all in English.) They merged or went out of business as the decades progressed. The New York World, was infamous during its Pulitzer ownership, but even this substantial essay doesn’t say where its archives ended up or if it was ever digitized.

It’s possible Penn Garment also advertised the job in other papers: New York City dailies, trade or union newspapers, “immigrant language” newspapers that would have been read by garment workers—Italian and Yiddish, most likely.

And, of course, it’s worth checking the Grit (or whatever the local Williamsport papers were in the 1900s—cousin D.T., I’m looking at you) to see if they advertised the job in Williamsport.

What are we looking for?
Probably a display ad, probably small, with the following key words: Penn Garment Co. or Company, Williamsport, Pa., uniforms, maybe “mail carrier uniforms,” maybe Penn Garment’s address at the time, which was in the Weightman Block building, 754-770 West 4th Street, Williamsport; maybe Mr. A. N. Bloom’s name; maybe the name of the factory owner, Frank Plankenhorn, who was a big shot of Williamsport; probably the job title of a man who would “run a uniform factory”—manager? director? foreman? The ad might also say “cutter” or “pattern maker,” which were the advanced skills Domenic learned at the trade school.

What date?
Domenic doesn’t say, and I’ve never been able to nail down exactly when he moved to Williamsport. (Does anyone know for sure?) It was after he graduated from the trade school (February 1913) and after a stint in Jamestown, New York (perhaps the rest of 1913?), but before he volunteered for WWI service (1917, from Williamsport). So I guess 1914 or 1915.

Side project:
Domenic names two places he boarded in Williamsport during his first year there. Are there local censuses, or a city directory, that might list him in 1914 or 1915 (or even late-1913?), helping us nail down which year he arrived? Is there a local Williamsporter among my relatives who would be willing to take on this side task?

What about the address of the interview—wouldn’t that be in the ad?
You bet. Domenic describes it as “a walk-up office building on Fifth Avenue not far from the New York Library.” There were many such small (five stories or shorter) office buildings along this stretch of Fifth Avenue during this period. Assuming “not far” is the two blocks north or south of the library and includes the two blocks the library itself takes up on the west side of the avenue (across from office buildings on the east side), we should look for an address between 38th and 44th streets: lot numbers 424–529. 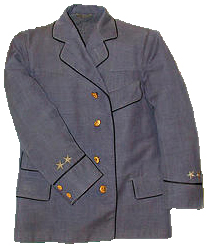