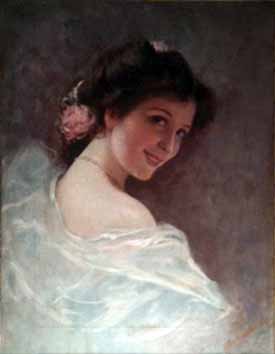 This painting is called “Lucia” due to an inscription in Buongiorno’s hand on its back. It may be the sitter’s name, or it may be the name of someone Buongiorno gave the painting to, as he was known to write dedications on paintings he gave as gifts.

Most of Buongiorno’s models were Italians. Though this sitter is not particularly Italian looking, based on her dark hair, and the Italian name “Lucia,” she may be Italian-born, or born of Italian parents.

I suspect her portrait may have been commissioned, as is usual when the models in Buongiorno’s paintings are not Italians (or Italian-Americans), though the painting is not dated in the signature, which is another hallmark of his commissioned portraits.

I have found some period images which may have influenced Donatus Buongiorno when creating this painting—images of pretty women who were in the news in the early 1900s and two paintings by John Singer Sargent.

In 1903, Miss Mary (May) Goelet, above, a wealthy New York heiress, married the Duke of Roxburghe in a society wedding of American wealth to British title that rivaled Consuelo Vanderbilt’s infamous marriage to Charles Spencer-Churchill, 9th Duke of Marlborough, eight years earlier. This 1890 image of Goelet may have been printed in newspapers at the time. Besides the dark hair and dark eyes, the rendering of the filmy fabric on the top of her dress looks like Buongiorno’s painting. Photo: Getty Images. 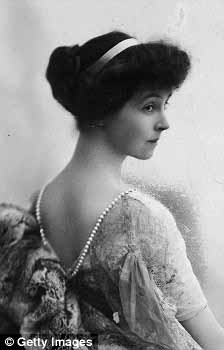 Or maybe Buongiorno saw this 1911 image of Consuelo Vanderbilt, which also reminds me of his painting because of its pose and the subject’s dark hair and straight nose. Photo: Getty Images. 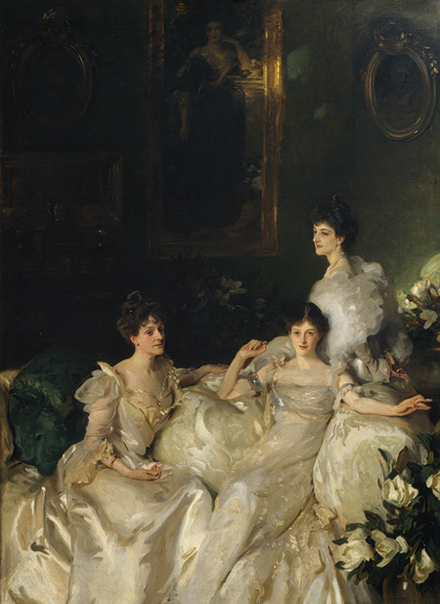 This John Singer Sargent painting, The Wyndham Sisters: Lady Elcho, Mrs. Adeane, and Mrs. Tennant, was painted in 1899 in London. As was customary at the time, even for privately commissioned paintings, Sargent probably kept possession of it for a year or two to submit to exhibitions and competitions before delivering it to his client. The Wyndham family owned the painting until 1927, when it was acquired by the Metropolitan Museum of Art. Buongiorno may have seen the painting on exhibition around 1900, or he may have seen it at the museum in New York sometime after 1927. (Though he was living in Italy full-time from 1927 to his death in 1935, he did travel to the U.S. periodically for work, including in 1930, so it is possible he saw this painting in 1930.) As demonstrated below, if you flop the image of the sister in the back, the position of her head, neck, necklace and dress material look strikingly like Buongiorno’s Lucia.

Comparison of the four womens’ images side by side. Click to enlarge. 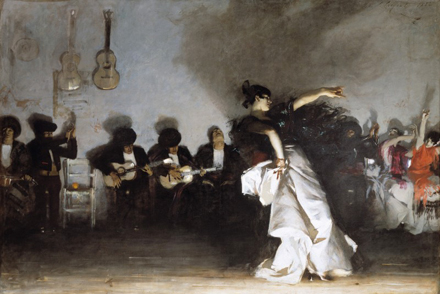 Or is Lucia, with those red flowers in her hair, inspired by “Spanish dancers,” a clichéd “exotic type” of the era, vividly displayed (in a most unclichéd manner) in Sargent’s El Jaleo, which is in the Isabella Stewart Gardner collection.

Painted in 1882 and exhibited widely, Gardner acquired Sargent’s painting in 1914 and immediately hung it in her Boston house museum, accompanied by much publicity.

Did Buongiorno see it? It is very possible, as Buongiorno was working on on mural commissions for several Italian-Catholic churches in Boston in 1914.

Sargent was working on a huge mural commission for the Boston Public Library since 1895, Triumph of Religion*, which was widely publicized and celebrated.

As a fellow painter of religious murals, Buongiorno must have known about Sargent’s work and probably went to see his paintings at the Gardner Museum and his murals at the library.

Buongiorno and Sargent had other things in common.

Sargent, only nine years older than Buongiorno, was born in Italy to American ex-patriot parents. He was raised in several countries in Europe by his itinerant parents and trained in European art academies in Italy and Paris. He didn’t visit the U.S. for the first time until he was 20 years old and, though he never lived in the U.S. permanently, he always retained his birthright American citizenship. He travelled extensively and frequently. He worked wherever he travelled and sold paintings in both Europe and the U.S.

Buongiorno was raised in a small Italian village and moved to Naples for his training at the Royal Academy of Art. Later, he moved to the U.S. at age 27 and become a naturalized American citizen at age 30. He lived permanently in the U.S. for 27 years and travelled frequently within the U.S. and to Italy. He worked wherever he travelled and sold paintings in both Europe and the U.S.

Buongiorno made an inadvertent trip to Boston, likely his first visit, on September 17, 1903, when a ship he was taking from Italy to New York was diverted due to a storm in the New York harbor. Later, he worked on church murals in the city in 1911 to 1915 and 1918 to 1919.

Both artists were both in Boston in 1919. Perhaps they passed each other on the street.

Did Buongiorno look at modern art?

Something that has puzzled me since I began my research is how stubbornly “19th-century academic” (realistic, not modern) Buongiorno’s paintings look, given that he was living in New York at a time of amazing artistic foment. Modern art was on the horizon. Impressionist paintings were being imported from France, setting the stage for the international art world to change (and shift to New York) after the two world wars.

Buongiorno had studios on 11th and 23rd streets from 1900 to 1918. The Macbeth Gallery, which was in business around the corner on Fourth Avenue, showed the work of “The Eight” and the Ashcan School, including John Sloan, whose work can be seen at this spectacular website—although it can be argued that their gritty, unsanitized, streetlife scenes are analogous to Buongiorno’s images of poor, Italian peasants.

But what about the modernists who painted simplified and less rigidly realistic images? Alfred Stieglitz was showing French modernists at 291 Fifth Avenue at 26th Street in the early 1900s. In 1914, the infamous, ground-breaking Armory Show which included French Impressionists and Marcel Duchamp’s Nude Descending a Staircase, was held a few blocks north of 23rd on Madison Avenue.

Did Buongiorno see any of this work?

The owner of Lucia was the first person who described any of Buongiorno’s work as Impressionistic to me (speaking about the treatment of the white fabric), so perhaps Buongiorno was influenced by something he saw, but in general, he seems to have been either oblivious or uninterested.

Or maybe if it wasn’t commercial, it wasn’t on his radar screen.

Sometimes I think Buongiorno grabbed at any popular image that was sellable—news boys, pretty women, et al.—and that he painted because it was a skill he was good at, not because he was trying to make a personal statement or express his inner-most thoughts (which are modern concepts of artists’ work.)

Maybe he just painted to sell images and to support a family.

*This terrific essay by Sally M. Promey at the Boston Public Library’s website explains Sargent’s intent that the subject of the murals is religious history rather than religious practice and, hence, appropriate in a library which is a “shrine of letters” containing “sacred” intellectual treasures.