“The Apotheosis of St. Clara” (sic)

Below are photographs of the interior of the church from a commemorative book about Franciscan churches in the U.S. which was published in 1925.

Although Buongiorno named only one mural (“The Apotheosis of St. Clara”) in his 1919 American Art Annual listing, there are three paintings over the altar that I assume were painted by him—St. Francis of Assisi on the left, St. Clare of Assisi in the center, St. Anthony of Padua on the right. The three paintings of angels in the arches above the altar may also be his work.

Located at 436–438 West 36th Street in Manhattan, St. Clare’s was demolished in 1935 to build approach roads to the Lincoln Tunnel.

I am hopeful that the paintings were moved and preserved, as I located a statue from the facade of the parish’s parochial school (which was located across the street from the church and was also demolished to build tunnel roads) in a nearby church. It is in the sanctuary of Saints Cyril and Methodius Church, which was formerly known as St. Raphael’s when it absorbed the parish of St. Clare’s Church in the 1930s.

If you know anything about the whereabouts of these murals, please write to me! 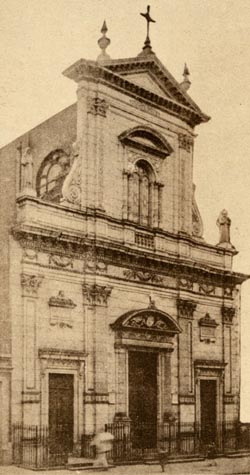 Do you know what happened to this painting?

Since it was painted on canvas, it would have been possible to roll and save. If anyone knows the whereabouts of this painting, I would love to hear from you.

Many thanks to Father Romano Stephen Almagno, OFM, who located this book in Franciscan archives and translated from it for me.