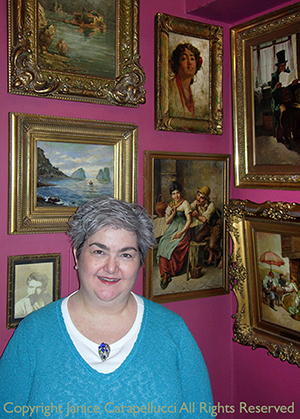 Available as a genealogy researcher for hire

From a small family genealogy project which I thought would take a few months, I became seduced by all things late-19th century in American and Italian history, especially involving New York, Naples, emigration, immigration, art and the decoration of Roman Catholic churches. Ten years later, I own 25 paintings by my artist ancestor and—amazingly, to me—can expound on subjects such as tariffs during the McKinley administration and the missions of different orders of Roman Catholic priests.

If you are hooked by what you’ve read, interested in joining my quest, own a painting you want to tell me about, or just want to share a good story, please do contact me by whatever means you prefer. I am thrilled when anyone reacts to my (obsessive, I admit) research project, and I would love to hear from you.

My Connection to Buongiorno

I am a great-grand-daughter of Donatus Buongiorno’s sister, Maria Michela Buongiorno.

Buongiorno grew up in the small town of Solofra, Avellino, Italy, in the 1860s. I grew up in the small town of Pittsfield, Massachusetts, U.S.A., in the 1960s. Buongiorno moved to the big city of Naples in the 1880s. I moved to a suburb of the big city of Philadelphia in the 1970s. Buongiorno emigrated to New York in 1892. I “emigrated internally” to New York in 1980. (I have always jokingly referred to the move as an “emigration,” as New York City is like a different country compared to the rest of the U.S.)

Like Buongiorno, I, too, am a commercial artist: “graphic designer,” we say now. I even worked for Italians for many years (Massimo and Lella Vignelli of Vignelli Associates.)

Growing up in an assimilated, barely Italian, Italian-American family, for decades I didn’t pay attention to this ancestor I knew vaguely as the painter of those “funny” paintings in my grandfather’s house. (My grandfather proudly owned several of Buongiorno’s paintings.) Being of 19th-century, academic style, Buongiorno’s type of paintings were very much out of favor when I studied art in college in the 1970s. Modern, post-war abstract and conceptual art was all the fashion.

Buongiorno wasn’t what we would call a “fine artist” today—someone who paints to express a personal message in his or her work. (Or that wasn’t his primary goal). He painted to earn a living and to support a family. He painted because it was something he had a facility for, and he studied at an art academy to learn how to do it professionally and commercially.

That describes why I went to art school and became a designer. I was “good at art” but had no burning internal message to communicate and no desire to be a “fine artist.” I wanted to do something commercial that provided steady, paying work. Design was the answer.

So I have a lot in common with this ancestor, and it has thrilled me to learn this 80 years after he died.

In 2007, I organized a family reunion to celebrate the centennial of the 1907 U.S. arrival of my mother’s Italian-immigrant father—Domenic Troisi (1894–1973), then age 13, who was Donatus Buongiorno’s nephew.

Buongiorno had lent Troisi’s father the money for the family’s steamship tickets, and they (the father plus three teenaged boys) lived with “Uncle Donato” during their first year in New York.

I became interested in Uncle Donato’s story as I researched Troisi’s haunts in New York. I already knew a lot of my grandfather (Domenic Troisi)’s details, but all I knew of Donatus Buongiorno was his 1907 New York address (from Troisi’s manifest) and a few paintings which Troisi had owned.

From that, eight years of research have yielded the trove of information on this website.

Buongiorno’s American Family From Then to Now

So how did my grandfather’s story end?

Domenic Troisi lived in New York for nearly 10 years, then moved to Williamsport, Pennsylvania, where he established a business and married an “American” woman (a great-grand-daughter of German immigrants.) They had a large family, including my mother, me, and 80 or so other American-born descendants.

It is not an exaggeration to say that none of us would exist had Donatus Buongiorno not been successful in his American art career. Buongiorno is “famous” only in our family, but we are mighty proud of him.

My grandfather, Domenic (Domenico) Troisi, did not keep in touch with his Italian relatives, but there probably are some, and we would love to know them.

He had a sister Vincenza who did not emigrate to the U.S. She was born November 9, 1879, in Solofra, Avellino, and married Valentino Siano, also of Solofra, on March 9, 1897, in Solofra. Are there any Sianos in Italy who are descended from this couple? If so, please contact me! (My Italian is not so good, but I have friends who will translate for me.)

Donatus/Donato Buongiorno had 19 siblings, of whom only two emigrated to the U.S., that I know of. Besides his sister (my great-grandmother) who died in 1906, and five who died as infants or children, that leaves 13 people in Italy who must have descendants. Some will be named Buongiorno. Who are you? Where are you? We want to know you! Please contact me!